In a world of standardized, FDA-approved drugs and methods, innovation can sometimes move slowly, resulting in missed, life-saving opportunities for patients. However, in the world of 3D printing, where custom, patient-specific solutions can be produced on the fly, longer-term approval processes don’t exactly fit. How could the FDA regulate a device that is literally different for each patient? In short, they can’t, and sometimes, when an un-proven, risky choice is your only choice…well, the choice is obvious. In these kinds of situations, the FDA will sometimes grant what is called “emergency use authorization,” allowing for the use of an un-approved drug or procedure if that path is the only option available (and not trying it will result in the patient’s death).

Such was the case back in October of 2013, when baby Kaiba Gionfriddo was born prematurely. Upon his birth at 35 weeks, all seemed normal. With his premature state his doctor’s did voice some concern over his lung development, yet with baby Kaiba breathing just fine, he was released to go home within a few days.

Approximately six weeks later, while the Gionfriddo family were having dinner at a local restaurant, Kaiba stopped breathing and began to turn blue. He was rushed to the ER. Following ten days in the hospital and another frightening incident, his doctors diagnosed baby Kaiba with a severe case of tracheobronchomalacia; his windpipe was so frail and weak that his trachea and left bronchus collapsed, stopping critical airflow from making it to his lungs. In response, Kaiba underwent a tracheostomy and was placed on a ventilator, the typical treatment for this type of condition.

In a great example of how 3D-printing technology is transforming healthcare as we know it, baby Kaiba’s doctor reached out to some groundbreaking physicians who had recently been speaking about their hopeful, yet un-tested, un-approved method of using 3D-printed lung splints to save infants suffering from severe tracheobronchomalacia.

The physicians that baby Kaiba’s doctor contacted were Glenn Green, MD, associate professor of pediatric otolaryngology at the University of Michigan, and colleague Scott Hollister, PhD, professor of biomedical engineering and associate professor of surgery. Doctor’s Green and Hollister had already created a prototype of the 3D-printed lung splint, a sort of tubular scaffolding designed to fit around a patient’s airway and inflate his bronchus and trachea. It was nearly ready for testing, but baby Kaiba needed help immediately. He was resting in the ICU with around-the-clock sedation, intermittently paralyzed. He was going to die. Doctor’s Green and Hollister moved quickly, getting emergency clearance from the FDA to surgically fit their 3D-printed, bioresorbable device onto baby Kaiba’s lung bronchi…allowing him to breath on his own. His life was saved. 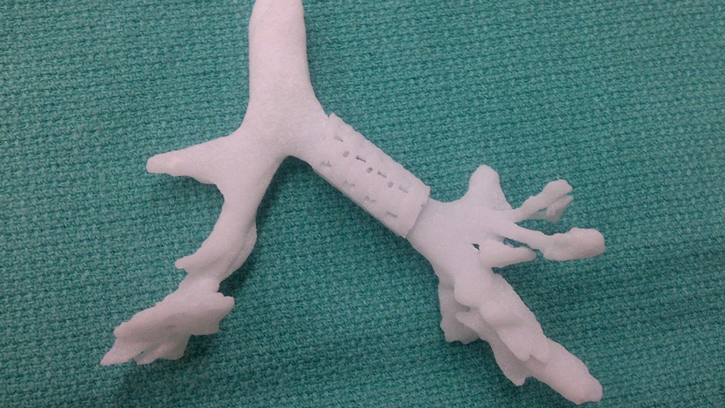 A close-up of the 3D-printed lung splint, fitted onto a model branch of lunch bronchi. Image Courtesy: University of Michigan

View the rest of this amazing story as it occurred in 2013 via this video. Following the video is an update on what has happened with baby Kaiba since his procedure, as well as the documentation of the procedure on other infants since then.

Today, baby Kaiba is alive and well…and his body has absorbed the 3D-printed splint material that kept him breathing. Kaiba has an open, healthy airway now, proof of a truly successful procedure.

As of this writing, two other children have received this same procedure and also appear to be on the track of recovery. The x-ray picture below shows their progress: 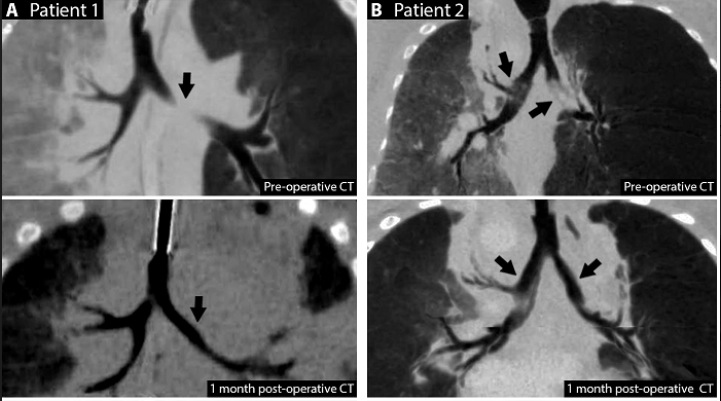 X-rays showing the before and after effects of the 3D-printed lung splints fit into patients. Image Courtesy: University of Michigan

While the 3D-printed splints have not yet been approved by the FDA for clinical trials, researchers are working with the FDA to plan just such an exercise, this time with 30 patients. No dates have been set yet, but we will be watching for it and will report back.

A World of Medical Devices and Treatments through 3D Printing

3D-printing is transforming medicine in profound ways. From custom prosthetics to “bionic” ears, there seems no limit to how this incredible technology will change and improve our methods for handling even some of the most difficult, medical challenges.

Here is a TED talk video, featuring Carsten Engel, that explores the future of 3D-printing in medicine…it is quite informative and inspiring: